If you live in the northern East Coast or Midwest, this summer you may have noticed trees suddenly losing their leaves. The culprits - an unusually high population of LDD moth caterpillars (also known as the European gypsy moth) hatched this year, and they are hungry. Read on to learn how organizations can use Lens to cost-effectively track rapid ecological changes.

Accidentally introduced in Massachusetts over a century ago in a failed attempt to breed a silk worm that could tolerate the New England climate, LDD moth populations quickly grew unabated without any natural predators. Some efforts have been made to quell its spread, and a fungus called Entomophaga maimaiga usually keeps these non-native moths at bay.

Yet LDD moth populations go through cycles with outbreaks every few years and larger peaks once a decade or more. Climate can also play an important role, and this year’s dry spring suppressed the growth of the fungus that kills the caterpillars and keeps their population in check. The resulting record emergence of caterpillars has caused significant impacts to forests in the northeast.

LDD moth caterpillar infestations can usually be tracked by measuring defoliation of trees, including oak, maple, and hundreds of other broadleaf species. Particularly bad infestations can defoliate over a million acres of trees in a year. University of Vermont’s Spatial Analysis Lab recently shared the stunning drone images below showing defoliation on Hogback Mountain in Vermont. Taken only a week apart, they show how quickly the voracious appetite of these caterpillars can impact the landscape.

If you are visiting your properties and see possible LDD moth caterpillar defoliation, how can you understand the full extent of their impact? Drone footage can be costly and time consuming to capture on a continual basis, which is what conservation organizations would require in order to track changes over time. Satellite imagery and ecological data layers in Lens give you a new and affordable option to see how trends like LDD moth outbreaks impact large geographies, and help you make a plan to track and address them.

In the below gif, we used Lens’ Compare tool in 3D mode to view high frequency truecolor satellite imagery from the ESA Sentinel satellite of the same Vermont hillside captured in the above drone photos. In this comparison made between imagery from June 6 and June 24, 2021, we can see the drastic change that happened over the course of just a couple weeks.

While truecolor imagery allows you to identify changes as they would appear in the natural environment, Lens’ vegetation layer gives even more information than is visible to the naked eye. This layer measures vegetation vigor using the Normalized Difference Vegetation Index (NDVI), which indicates photosynthetic activity based on red (visible) and near-infrared satellite data. NDVI is a number which ranges from 0 to 1, with higher values indicating greener and denser vegetation. This data provides a reliable way to evaluate vegetation health and changes over time.

The gif below again uses Lens’ Compare tool in 3D mode for the same dates on Hogback Mountain, but this time applies Lens’ vegetation layer. NDVI highlights the drastic change in vegetation health: in the June 6th imagery, we see mostly uniform dark green within the area selected by Lens’ Analyze Area tool (the yellow square), denoting high vegetation vigor. This is because these deciduous trees have fully leafed-out for the summer and are producing high photosynthetic activity. Contrast this to the large swathe of lighter green and yellow in the imagery taken only 2.5 weeks later, which shows significant drops in photosynthetic activity after the caterpillar outbreak munched off all of the trees’ leaves. The final two dots on the Analyze Area graph, both outlined in red, correspond to the two dates we are comparing.

Here’s how these changes would be represented in Lens’ report mode, which can be used to share the story of these impacts with other staff and stakeholders.

The good news is that most trees should have enough energy reserves to grow a new set of leaves later this summer. However, if one were to occur, another drought and caterpillar-driven defoliation event next summer would be significantly dangerous to trees that were depleted by this year’s infestation. If your forests have been impacted by the 2021 LDD moth outbreak, you can also use Lens’ vegetation layer to track leaf regrowth over the remainder of the summer.

Interested in learning more about how Lens might work for your organization? We’d like to hear from you! Please send any questions or comments to lens@upstream.tech. 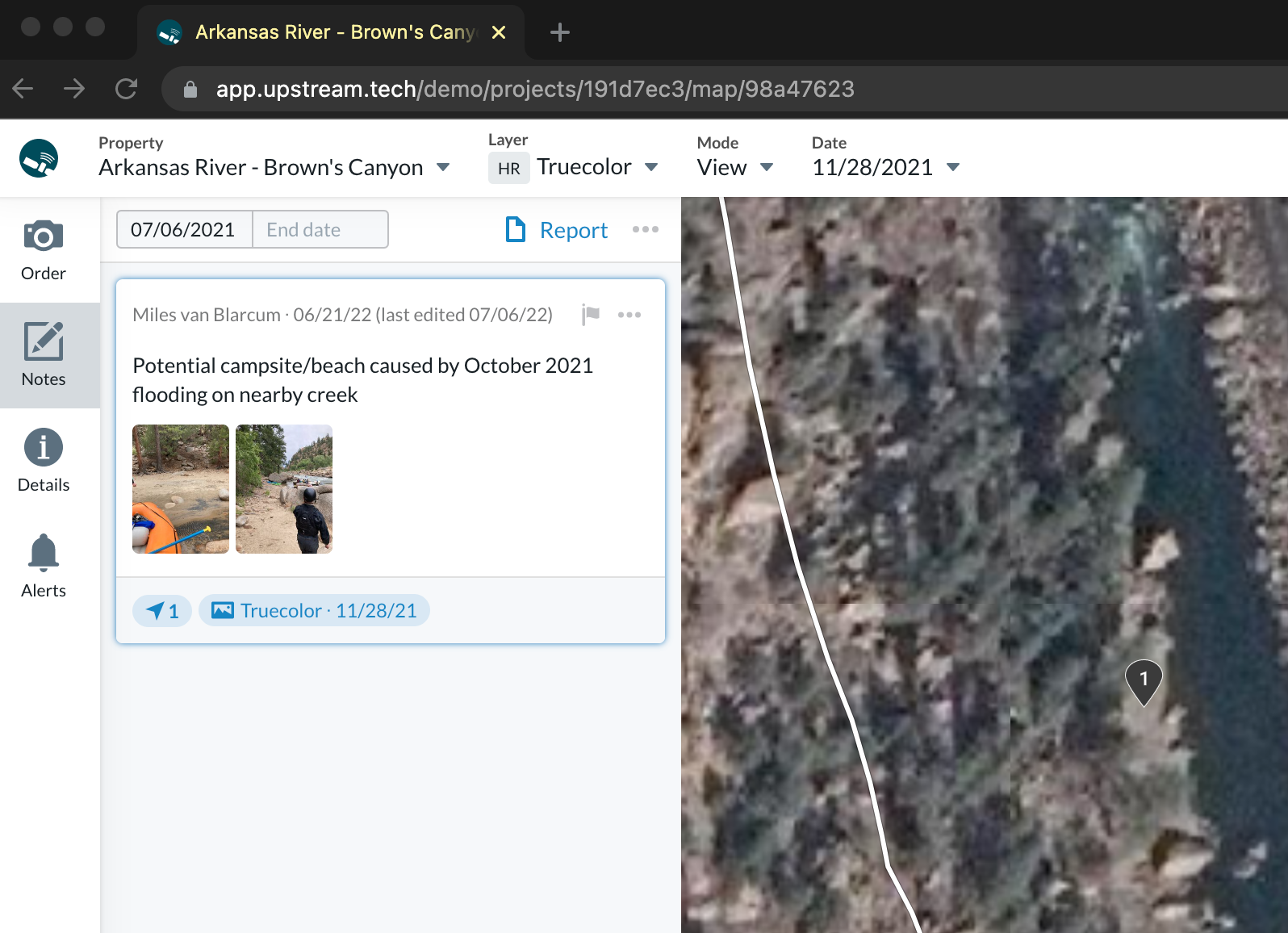 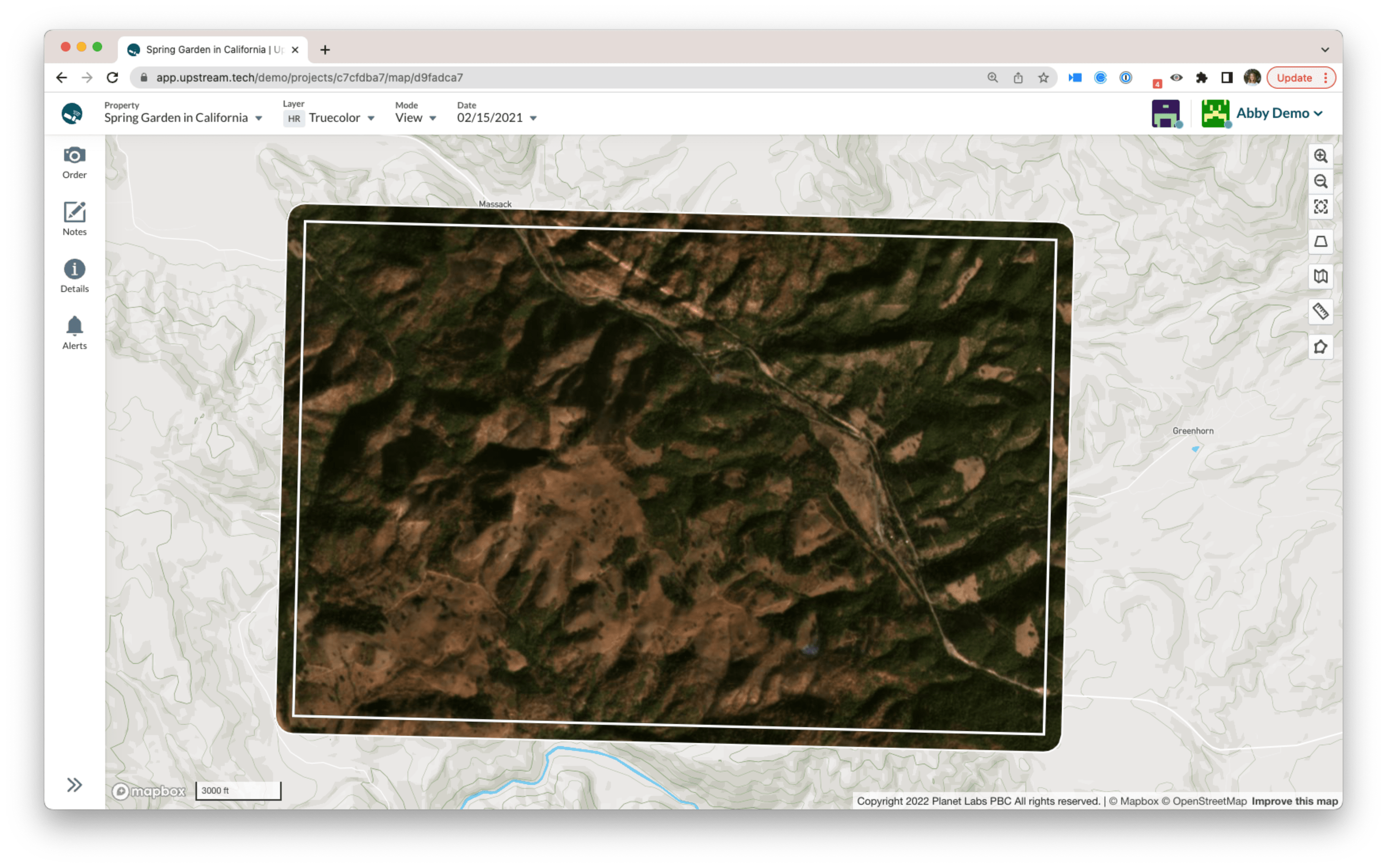